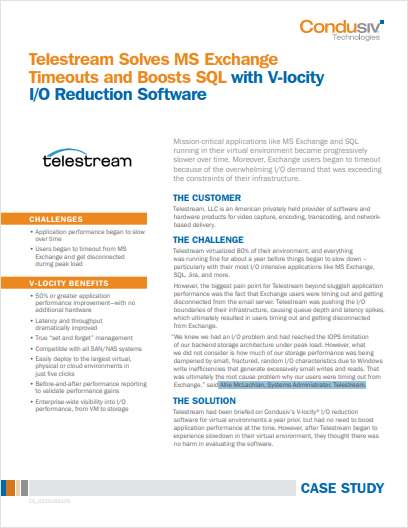 Telestream application performance began to slow over time and users began to timeout from MS Exchange and get disconnected during peak load times.

Telestream virtualized 80% of their environment, and everything was running fine for about a year before things began to slow down – particularly with their most I/O intensive applications like MS Exchange, SQL, Jira, and more. However, the biggest pain point for Telestream beyond sluggish application performance was the fact that Exchange users were timing out and getting disconnected from the email server. Telestream was pushing the I/O boundaries of their infrastructure, causing queue depth and latency spikes, which ultimately resulted in users timing out and getting disconnected from Exchange.

Telestream had been briefed on Condusiv’s V-locity® I/O reduction software for virtual environments a year prior, but had no need to boost application performance at the time. However, after Telestream began to experience slowdown in their virtual environment, they thought there was no harm in evaluating the software.

“As soon as we installed V-locity and saw the Exchange timeouts disappear, and users were no longer getting disconnected from Exchange, that made our purchase of V-locity I/O reduction software a ‘no brainer,’” said Allie McLachlan, Systems Administrator, Telestream.

“The most eye-opening experience was finding out how badly our system performance was being taxed by small, fractured, random I/O from Windows write inefficiencies. We would have had no idea that was even an issue without trying V-locity to solve those root cause performance issues.”

Open Now
Modern Metamorphosis: The Imperative to Transform With Purpose

Open Now
Security Maturity and Business Enablement - and the...